I am so excited you guys I almost don’t know where to begin.  I think you all know this, but just in case I forgot to tell you, when I came home with Dad to my new home there were three cats already here. I usually call them basement monsters for fun but I know what they are (now). The problem is they don’t seem to want me around much. I was really starting to get depressed, so I talked to Dad on the ride to work one day. That’s where we really get to talk about things, ya know. I asked why Dad thought I never get to play with the kittehs. He said maybe it’s because I’m so much bigger than they are. That made no sense at all! I’m like one human year old and the old lady cat is seventeen; she’s WAY bigger than me. Dad laughed and said that bigger and older do not mean the same thing. I really don’t see the difference, he tells me all the time how the cats sat in his lap, I sit in his lap now, so…gawwwww, whatever…Dad asked me to trust him and try the down-stay whenever I want to see the kittehs. He’s been right a couple times, I guess, so maybe. He also asked me to try and not get so excited and that might help too. Apparently my running room to room doesn’t mean ‘C’mon follow me let’s play chase?’

I thought about it while we were in more of Dad’s boring meetings at work. I figured I’d give it a try since my way really only gets me hissed at, chased away, and clawed. Guess what you guys? As it turns out Dad is pretty smart (sometimes). I started with backing up, or just stopping in my tracks because I was too distracted to lay down. I couldn’t believe it; that actually worked better than running. Since then the kittehs have spent more time on my side of the gate. The fluffy black one (Winkie/Capt. Fluffy Tail) will greet me nose to nose. This is real progress people!

Mom has even helped me make friends with Lucy (sort of). She doesn’t like me but she will allow me to be within a foot of her while she demands her breakfast and dinner. This has been a lot more difficult than it sounds. I had to start by lying down on the kitchen floor while Mom stayed close to the gate in the dining area giving the kitteh pets. Mom then called me forward; I had to crawl but we did it. I made it all the way to the gate without losing the whisker she keeps telling me I’d lose! I really feel better knowing we’ve made progress and someday I may get to be friends them.

Hey, guys, Mom just finished editing this and sent Dad an email asking if she can post the old lady cat’s (I guess her name is Lucy) side of the story. I say go ahead. No way those basement monsters can say I am anything other than fair and unbiased. Apparently they have been talking in the morning after Dad and I leave. Well, I for one can’t wait to hear this!

My name is Lucy and I am quite offended reading that the mongrel calls me the “old lady.” I may be older than him but I am as spry as a kitten, let me tell you. I can still tear his big fat nose right off that slobber face if I wanted to. (Ok. I WANT to, but the humans would be mad and it’s not worth losing a comfy home and regular meals over.)

I have been with “Mom” for over 17 years. I am her baby. Really, until recently I didn’t like any other humans but her. Sometimes she makes me spitting mad, like when she brings home new animals! I had MANY cat and dog siblings over the years. The cats are ok, after a while. The dogs? DO NOT GET ME STARTED. I just don’t like them. Why would anyone want a giant slobber hunk of stink in their home? **sigh**

She even brought home those tiny humans. They were ok at first, loud, but smelled like milk. And they were warm. And I loved that nice enclosed bed they had. That was comfy. Then they learned to walk upright and all hell broke loose. The biggest one is ok now though. She knows how to hand out some prime pets now. But I digress.

So they bring home this giant of a mongrel a few months ago and I am all like. “Oh, hell no! I am NOT even trying to civilize another one of those. They never learn. See ya! I am moving my furry butt to the basement. Bring my food regularly and clean the poop box. I am OUT.”

I thought that after a while the humans would miss my lapsits. See, I like “Dad.” He is a pretty good guy, easy to train. Every night at 8pm I would demand that he sit on the couch and I would sit on his lap for 2 hours. Exactly. If he was late then he had to stay until I had my fill. (He was also good about feeding times. I like a well regimented household.) He LOVED lapsits and I knew it would only be a matter of time before he realized it was the mongrel or me. Once he figured it out he would get rid of that, that, DOG and things would be back to normal. I forgot how STUPID humans are.

So, recently I realized I was at a crossroads. Either I spend my twilight years in the basement with no pets or I finally put on a stiff upper lip and tell the dog who is boss around here.

I started slowly. I organized my crew and we all three made an appearance in the kitchen one morning. This was no easy task. Pixie and I have a sort of truce now that we have an even bigger enemy, but since she won’t bend the knee and recognize me as queen we will never be what you humans call “friends.” Winkie is easier to sway. He is a big fat chicken, but offering him a larger portion of wet food wins him over every time. There we stood. And it worked. That dog was flabbergasted!!! I was yeowling with laughter when they headed off to work.

After that he started calming a bit and that down-stay trick (dogs are so pliable to their master’s will) gets him more on my level. Of course his head is 3 times my size, but my fists of fury will get him if he gets out of paw.

Now I greet “Dad” every morning for pets and that dog is just beside himself about it. This was totally worth the wait. Now, I just have to get my lapsits back. I am not ready to face my foe in the living room. That has become his territory and I must get reinforcements before I brave that battle. I will keep you humans informed about my progress.

Also, here are photos of us. “Mom” shares way too many of that beast and not enough of us! 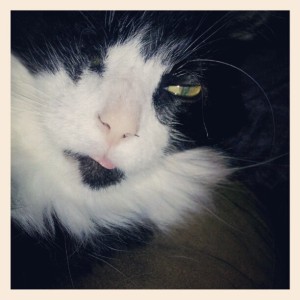 written by DFS and LJS

13 thoughts on “An Uneasy Truce” 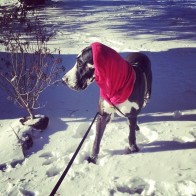 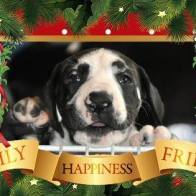 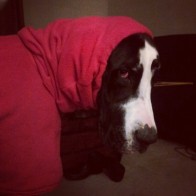 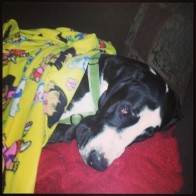 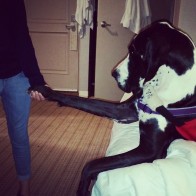 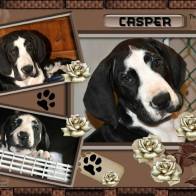 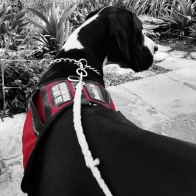 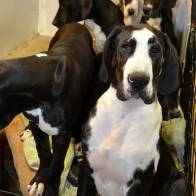 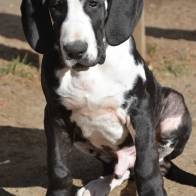 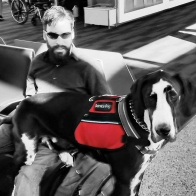 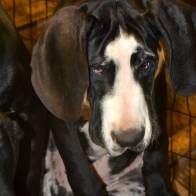 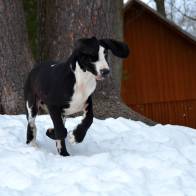 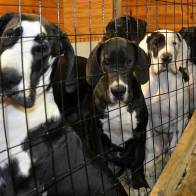 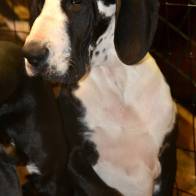